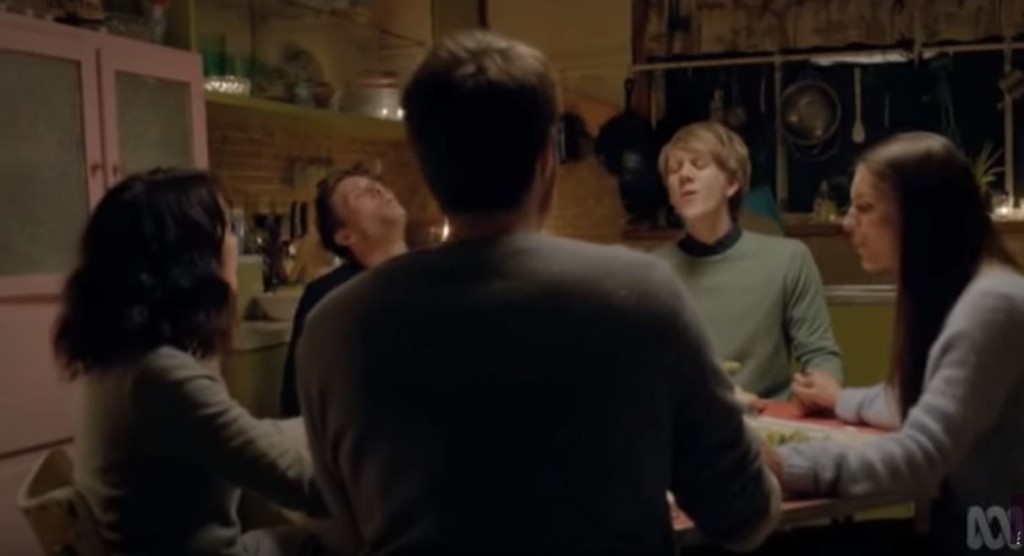 (The image is a screen shot from Please Like Me, showing the characters holding hands and singing around the table.)

In the Please Like Me episode ‘Coq Au Vin’ Josh deals with the fact that his chicken, Adele, is really a rooster. In an attempt to keep it real, he and his friends kill and eat the bird.

As a mark of respect to the rooster they hold hands around the table and sing Adele’s song ‘Someone Like You’ before tucking in. They are bad singers but sing with mock conviction and I find it very funny.

I watched ‘Coq Au Vin’ in the first few weeks after my second child was born, and this scene is now linked in my mind as a kind of anthem for the post-natal depression that I’ve had for the past ten months.

It makes no sense. ‘Someone Like You’ is about yearning for lost love and a hope for finding it again in the future. Please Like Me deals with a lot of mental health issues, but that particular scene is about the inherent cruelty of life and perhaps also the friendships that make it worth it.

In no way is the song or that scene a reflection of my post-natal depression experience. I was not grappling with those issues. The resonance it has for me makes no sense.

But in many ways the whole thing has made no sense, and defied my numerous attempts to defeat it with logic.

I want to write about it, but I don’t think I can in a linear, this is how it started, this is where it ended way. So keep the title in mind if you want to read on.

I hated being pregnant. Immediately after the birth of my second child late last year I was delighted that it was over, and that I could get on with the fun bit, looking after a baby. The birth had gone approximately how I’d hoped and I had a quiet sense of triumph. This looks very much like being smug.

Twenty-four hours later I was hit by a physically painful, completely illogical grief that my pregnancies were over and a feeling that the rest of my life would be meaningless. I thought it was just hormones and the baby blues, which 80 percent of women experience. But at the same time, comparing it to my previous experience, I knew how I felt was too extreme and wasn’t normal. I didn’t want it to be normal because it would be a horrible thing to be normal.

After the initial stage where I was extremely upset I was able to get on with things and was basically fully functioning (like an ideal second-hand sewing machine). There were many times when I benefited from a lot of help, but it wasn’t like I couldn’t get out of bed. Instead of being cheered up by a sense of achievement, my productivity led to more negative thoughts. I worried that I was too competent to be depressed and was actually an attention seeking mental health malingerer.

I often felt guilty about making a fuss. After all, I had two healthy children and many things to be grateful for. Oprah says all pain is the same, but surely, I told myself, some pain is just carrying on like a pork chop?

I still worry about this. I am tempted to write details of the most difficult bits to convince readers (and myself) that my problem wasn’t trivial. I am resisting that urge and you will never get to hear about my dark, dark thoughts about ceramic penguins (they are totally dark, and you would realise how difficult my struggle has been if you heard them).

I still wrote things. Often typing on the computer was when I felt best. So I wrote a lot of cheery blog posts about Baby-Sitters Club books and my feelings about the Olympics and cafes to remind myself of things I used to enjoy and also as a way of reaching out to people.

I have been far more active on social media. I think we all know that a person’s performance on social media is exactly that, a performance and is not usually an accurate portrait of how they really are. However, the little interactions I had with people were often helpful as a way to stay in touch. So don’t believe a word anyone says, but give them digital high-five anyway.

At first I was uncertain about what I was experiencing and Googled post-natal depression and baby blues a lot. But even when it became clear that I was ticking the boxes for PND, I was at times convinced that there must be something else at the root of my physical symptoms.

These are some of the illnesses that I extensively consulted Dr Google on: Lupus, hypothyroidism, hyperthyroidism, anaemia, coeliac disease, Parkinsons, MS, cancer (many types!), psoriatic arthritis, lead poisoning.

To be fair there were a couple of times when I successfully diagnosed a family illness on the internet (scarlet fever!  guttate psoriasis!) but mainly it was just a diverting hobby that led my GP to think I’m a hypochondriac.

Being depressed can make you feel tired and sick. When you’re not used to feeling tired, sick or depressed this can be particularly confusing.

Apparently lots of people with post-natal depression don’t seek help. I did. Frantically. This might be because it was my second child and so I kind of knew that what I was going through wasn’t just normal adjustment. On bad days I think it’s because I’m a whinger who can’t cope with normal adjustment.

I spoke to many people about how I was feeling. Sometimes it was helpful and sometimes it wasn’t. I’m just going to focus on the helpful bits here.

Melbourne City Council Family Services were fantastic. My Maternal Health Nurse was the first professional to take my distress seriously. Apart from the normal appointments the nurses called me up to check on me, which I was very grateful for. I was also referred to some excellent programs that I felt lucky to be part of.

I went to mother and babies group for women experiencing early parenting challenges. I was reluctant to go because I thought my situation wasn’t serious enough and that there must be more worthy people to attend. There is some truth to that. There is an inherent bias in these groups towards people who can actually leave the house. At the first session I cried quite a lot and decided it was probably appropriate for me to be there.

PANDA is a particularly good help-line. They talked to me for ages and gave me referrals, but they also called me back to check up on me.

A range of health professionals joined my life, including a psychiatrist. I know there’s supposed to be a stigma about seeing a psychiatrist but I felt it gave my situation much welcomed gravitas.

I started taking antidepressants for the first time. It was a very hard decision. The small uncertainty regarding the risk of harm to the baby, a fear that the drugs would change my personality (which was otherwise such a delight!) and concern that I didn’t really need medication and should tough it out were some of the things that I worried about. It was an enormous relief once I made the decision to start taking the medication and I cheered up considerably for about a week. Since that delightful placebo effect it’s been difficult to tell if the medication has helped.

My friends and family were very supportive. People have been extraordinarily generous and I cannot imagine having to go through the experience without them.

I am sorry for the negative effect it has had on other people, particularly my partner and children.

I’m no longer sure if I’m a resilient person. My will to continue is more fragile than I thought and resilience might not be the ultimate virtue anyway.

I did not expect this to happen.

I am a very fortunate, privileged person with a lovely partner, children, extended family and friends. I am healthy (supposedly, but I will keep Googling medical conditions anyway). I had paid maternity leave and I have a job to go back to.

During my first pregnancy I was very concerned about the decrease in quality of life that I was told children would bring. I wasn’t sure if I wanted to have children but I knew I didn’t want not to. I thought I might have regrets. I was very worried about post-natal depression and almost assumed I would have it.

After the birth of my first child I was astonished my how lovely and engaging I found having a baby.

This led me to conclude that I was someone who was good at being happy. When I read articles about mindfulness I would think, ‘I totally already do that! Tick for me!’ I had been mindful for years and not even realised it! I was like some kind of happiness savant, I thought, all be it the kind of savant who waits till her late twenties to hit her stride.

After a physically uncomfortable second pregnancy I was looking forward to a similar experience. Challenges but joys and rewards as well.

I found both my babies delightful and interesting beyond all logic. But this time it has not brought the happiness that I expected. For a long time all my mindfulness tricks to cheer myself up either did not work or worked to a disappointingly limited extent.

Sometimes I think I brought the whole thing on myself with unrealistic expectations. I’m just another example of a modern parent who thinks they can have it all when really life is just a bit shit and we all need to appreciate how lucky we are, stop complaining and get on with it.

In high school I liked the quote ‘If you expect nothing, you’ll never be disappointed’. (Keep in mind that at this time my role model was Eeyore.) I once quoted this to my sister and she replied, ‘Yeah, but you’ll also be totally depressed.’ Since then, I’ve thought that she was right. And so, I don’t accept that I have to feel like shit, I expect to feel good, and sometimes very good, but not always.

Going back to Adele, I’ll find ‘Someone like you’ where ‘you’ is really me but a happier future me who I wish the best to, while not wanting them (me) to forget the previous (currently current) me. You see! It all fits. As long as we ignore the last line, ‘Sometimes it lasts in love and sometimes it hurts instead’. That’s weird and not helpful.

2 comments on “Don’t try to follow it, it doesn’t make sense”