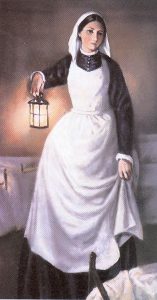 (The image shows a painting of Florence Nightingale holding a lamp.)

When I was in year 12 I wrote a ‘quote of the day’ in my school diary. Sometimes the quotes were from famous people like Oscar Wilde (he was terribly witty and sometimes it feels good to copy that stuff down with a pen). Sometimes the quote was something a friend had said.

The majority of my quotes of the day came from my maths teacher, Fletch.

On the first day of Year 12 Specialist Maths we sat at the back of the classroom (we were all maths nerds so it was our one chance). When Fletch came in he made us move to the front tables then gave us a motivational speech. He said the only way we country state school students could compete against the fancy private schools was to work together. We rolled our eyes and acted like it was stupid, but as the year went on we developed some top quality academic camaraderie, and just quietly, we did okay.

Fletch was a self-reflective teacher and kept up a running commentary on his performance as he taught. When he felt he’d made a wrong turn he told himself to shut up. Every time, I wrote it down.

Fletch told us that when tackling a difficult maths problem you should be like Florence Nightingale holding her lantern. You can’t always see the whole path, but you can see where to take the next step. He returned to this analogy often and would sometimes mime holding a lantern while doing a difficult problem at the board.

The Florence Nightingale technique doesn’t just work for maths. I have found his advice useful in writing, life and drinking wine.

Fletch told us he would shout “Go mg sin theta” as he rode his bike downhill during his school days. The best maths teachers are born, not made.

When he said this to our class, Fletch was talking about inconsistencies in maths symbolism. No, not East Timor. Maths symbols.

I’m not sure if we appreciated Fletch enough at the time. I remember rolling my eyes at his daggy anecdotes. One time no-one in the class would examine the interesting way the light from the window was hitting the chalk on the blackboard, even when Fletch repeatedly peered at it, told us how interesting it was, and invited us to come and look. Sometimes when he asked almost rhetorically, ‘What’s the square root of 16?’ Someone would answer, ‘Four’ just to see him go apoplectic, ‘PLUS OR MINUS FOUR!’

Best maths teacher I’ve ever had.

At the end of year 12 we gave him a lantern.