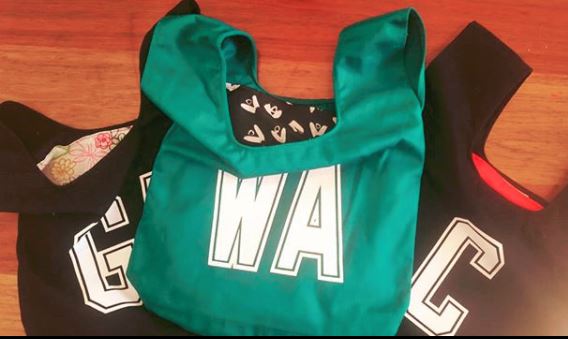 I’ve become tired of answering the same questions about my netball bib bags (sold through the Etsy shop If You Need). I’ve prepared this list of answers to Frequently Asked Questions.

I have hands and arms. Why should I use a bag to carry things?

Bags can greatly assist in the ease and efficiency of transporting a range of items. I’ve written more fully on the topic here. Although it can feel strange at first, most people who start using bags say they wish they had done so earlier.

Were any netballers harmed in the production of your bags?

If You Need is a certified netballer friendly organisation. Our netball bib bags are made from 100% genuine netball bibs. All netball players are safely and ethically removed before processing begins.

Yes. Netball bib bags are lined and can be reversed by turning them inside out. Reversing the bag will hide the bib’s position, so this is the suggested styling for Wing Defence bags.

Can I carry a netball bib bag with a position I don’t play?

There’s no law against it, it’s a matter of conscience.

How many netball bib bags should I own?

One hundred is too many, zero is too few. While there are no hard and fast rules to work this out I’ve found that your age divided by three plus seven is generally ample.

Do you make anything else out of netball bibs?

This is an area of current research and development. Plans for future development using netball bibs include a perpetual motion machine and gold.