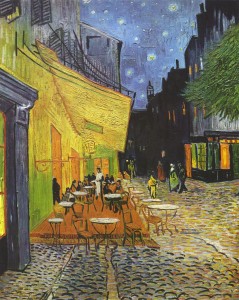 I love going to cafes. I sometimes think that the amount of joy cafes have brought to my life is disproportionate. And by that I mean that I am not exaggerating when I say ‘joy’ and I think I should be. My life’s happiness should not have been materially touched by the existence of a room with a coffee machine and some baked treats, but it has been.

I can’t remember when I first went to a café but it was late by today’s standards. In the 1980s small tots were, perhaps appropriately, not sipping bubacinos every second day as a way to motivate them to stay still for thirty seconds while their parents try to motivate themselves with caffeine to go to the park. So I don’t remember ever going to a cafe as a young child. (Please do not feel sorry for me, I had plenty of treats like a free slice of strass when we went to the butchers.)

My first job was in a the local bakery/deli/supermarket/café in my very small home town. The café component of the business consisted of two tables and an espresso machine, which I operated very badly. Part of the problem was that I didn’t get much chance to practise as people rarely ordered coffee. The ‘café’ only owned two latte glasses. My friend and I used to joke about what would happen if someone ever ordered more than two lattes. The joke was that we knew this would never happen. (Until the Great Victorian Bike Ride stopped unexpectedly in town when it was raining, which is all a disastrous blur in my mind, but anyway we used disposable cups rather than making people take turns for the glasses.)

In nearby Castlemaine there was a thriving café culture but despite there clearly being heaps of time between netball, music lessons and dance classes my mother chose not to take her four daughters to cafes very often.

So I was not a regular café goer before I left home. There were glimpses though. One time I had an interview for an exchange program in Melbourne. Afterwards my mother took me to Richmond Hill Café and Larder. We sat on cane chairs and yellow was the feature colour. I had kippers on toast and a coffee and felt like I was finally living.

When I first moved to Melbourne I was too poor to eat at cafes but would occasionally meet a friend for coffee. It was not until I was in fourth year and I moved to a share house in North Carlton that I made my next big café discovery. My housemates went out for BREAKFAST. I had not realised that such a thing was occurring. For my first ever external breakfast we went to Small Block, had to wait for a table and sat on tiny stools. There was a lot of concrete and red was the feature colour. It was incredibly uncomfortable and amazing. Going out for breakfast was a thing and I loved it.

I am now so spoilt for café choice and go so regularly that it takes a little more for the old rush of elation to come back. But sometimes it does. Usually, it involves finding an excellent café unexpectedly and suddenly feeling that I’m living a charmed life.

Like the time I had been demoralised by a bad work meeting, missed a train and then wandered down the main street, where I discovered The Duchess of Spotswood. There was a lot of wood and aqua was the feature colour.I had a ginger muffin and a cup of tea. All was well.

My partner and I sometimes drive from Melbourne to Adelaide with small children because we are very glamorous. We once stopped in Dimboola, a quiet town with an historic but faded main street. We arrived in town expecting to buy a Big M from the fish and chip shop. I was bracing myself for yet another conversation about the superiority of Farmers Union Ice Coffees. And then there it was. The Mason Clarke Preserving Company. Specialising in local produce, roasting their own coffee, and selling home-made lemonade with white and red paper straws. Now every time we do the drive we plan to stop in Dimboola and approach it with white-knuckled terror that the children might oblige us to break in Horsham instead.

I can’t fully explain why cafes make me so happy. Perhaps it stems from my childhood, growing up always packing our own food, doing our best to keep the Glad-wrap and Tuppaware companies afloat. There is something very refreshing about ordering whatever you want and leaving the mess. But you would think I’d get over that, and I haven’t. Maybe I just like sugar and caffeine. But you would think that after the high faded the glowing memories would too, and they haven’t. Like much of the point of living, it cannot be rationally explained.