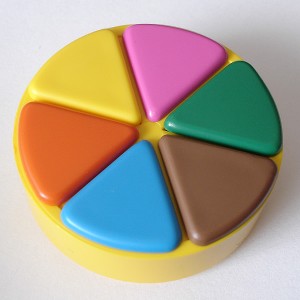 I’ve been to a fair few Trivia Nights and attending one is always an emotional roller-coaster. I’m finally ready to talk about it. There are six emotional stages of Trivia Night that I always go through.

I start the night feeling hopeful. I envisage, that much like in Slumdog Millionaire all the answers will be obscure facts I have picked up in my journey through life. I listen with great attention to the first questions, poised to frantically spitty whisper the correct answers to my team mates. ‘How do you know this stuff!’ they will gasp. ‘Oh -‘ I will say, ‘I read Ulysses by James Joyce while on maternity leave.’

By the end of the first round I realise that the only questions I will know the answers to are the ones that everyone knows like, ‘Name 23 Kardashians whose first name starts with K’. If there is a question on Ulysses by James Joyce I will not know the answer because I didn’t understand it when I read it and have subsequently forgotten precisely 100% of what I read (when I say I ‘read’ Ulysses, it’s probably more accurate to say that I looked at every word on every page).

Boredom sets in after I accept that there will be no questions on the life of Richard Feynman or Phar Lap and I also accept that my useful role in the Trivia Night is strictly that of chips eater and doing my darndest in the heads or tails competition (I always choose heads every time in homage to Rozencrantz and Guildenstern Are Dead). My interest in the evening wanes and the evening waxes. Trivia nights last for approximately 100 hours if you’re the type of person like me who’s confused about where the Pacific Ocean is and hasn’t seen many films.

Embarrassment can arise in a couple of different ways.  Chemistry questions are usually mortifying as I have a degree in Chemistry but no knowledge of the subject. The other way I can be humiliated is when suddenly, joy!, I do know the answer to a very daggy music question that no-one else knows because they are not daggy enough.

There’s always one question that I do know the answer to but because I am by then staggering under the accumulated weight of my previous ignorance, I don’t have the courage to speak up, and as a result, my team gets it wrong. For example, I might not cry ‘No sir! You are wrong!’ when a team mate says that Phar Lap won two Melbourne Cups. (Actually that’s a bad example, I would fight to the death with righteous certainty over that one, but I did once remain silent while a team mate attributed a quote to Adam Smith that was clearly Karl Marx, which I should never have let happen.)

The final stage is elation, which either comes from the night being finally over or, and you might be surprised by this, because my team has won! Because despite having very little personal knowledge I have been on many winning tables due to sensible friend selection. Once we’ve won I care very little about not having done anything to contribute to the team’s success and am overjoyed and very happy to take home the free wine.