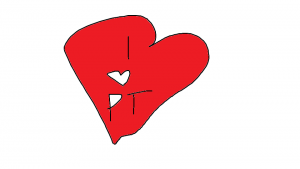 I once thought that it would be Fun to see Casablanca at the Moonlight Cinemas in the Botanical Gardens on Valentines Day, with a group of couples. When I was single.

The evening was actually less fun than it sounds…

To begin with the people I’d chosen to go with were less than ideal. Firstly, there was my sister and her boyfriend Daniel. They got along very well on this occasion although she dumped him a month later because he was a massively bigoted tool. For example, while glaring pointedly at two men sitting in front of us who were holding hands, Daniel explained to me that the Roman Empire fell because of their acceptance of homosexuality. I remarked that it was more likely that one of the bats flying over the Botanical Gardens was actually batman. Daniel then went into a half hour rant about how batman could be made to be more bat-like and less like a person dressed unconvincingly as a bat.

The newest couple in the group, Robin and Miles had only been going out for a week. Their relationship was based entirely on nerves. They were incapable of having a conversation if they were touching each other. Robin could talk to you if Miles was more than two meters away. But as soon as they so much as held hands all conversation would dry up and they would simply smile and stare straight ahead. Twitching occasionally.

Then there was my friend Tanya and her boyfriend Glen who continuously humped each others legs throughout the entire evening. At least they were able to chat to others at the same time.

Of course, I was not the only single person in the park. There were many groups of single girls. They were in high spirits at the start of the evening. Opening their picnic baskets and champagne, they had a devil-may-care attitude that screamed to the world, ‘We’re single on Valentines Day. And we’re having a great time! Pass me the Camembert!’ Half way through the film however they started to see the injustice of the film. ‘She had two men! Two!’ Faces curdled and you could see the devil-may-care attitude slip into mild depression (some people actually sobbed quietly and not at the sad bits). By the time Bogart was reminiscing about Paris I could hear dozens of singles muttering, ‘Why couldn’t we have gone to Ferris Buelers Day Off?’ and flicking Brie at anyone who looked like they might be in love.

There were many people there who looked like they might be in love. The Moonlight Cinema is a popular romantic choice for couples at any time, let alone on Valentines Day. It was a lawn covered with cuddling and I was struggling.

Generally, I like to see myself as an internally self-sufficient person. I don’t need to evaluate my happiness by externally imposed expectations and material standards. However, I must admit that I began to feel increasingly jealous of some of the people at the Gardens who were obviously in a better position than me.

Of course, I’m not talking about having a boyfriend. I’m referring to the fact that I was starving, uncomfortable, and freezing to death. I mean it sounds nice, doesn’t it? Sitting in the park on a summer evening watching films and enjoying a picnic. In reality, the ground is extremely hard when you sit on it for three hours. It was also cold. When I left the house at 7:00pm it was a balmy 25 degrees. But by the time the film started at 9pm there was an unrefreshingly cool breeze. As it began to get properly dark I started to shiver and noticed more experienced Moonlight cinema goers had brought sleeping bags, doonas and a pillow. Sure, some of the single ones still looked like they wanted die, but at least they were suicidal within a warm, cocoon. In my group, we only had one blanket, which had been claimed by Tanya and Glen. They were using it as an ineffectual veil over their dry rooting.

Even worse, everyone else in the gardens had brought better provisions than we had. Not being very organised we managed to scrape together a tub of hummus, some semi sun-dried tomatoes and a packet of Captains Table watercrackers. Between seven. Meanwhile all around people with more boy scouting ethos had brought champagne, strawberries, cheese platters, chocolate cake and so on. One lucky couple had a lobster.

After awhile I started to feel aggrieved with these people who were touting their comfort, food and boyfriends in front of me. Everyone was showing off what they’d brought with the result that almost everyone ended up wanting something on someone else’s picnic blanket. Some people were crying because they didn’t have a boyfriend. Others cracked it because the dip ran out. I couldn’t wait to go home on my own and be able to compare myself to myself and realise I pretty fabulous after all.

When the film finally ended everyone filed out of the gardens towards St Kilda Road. Tanya chose this moment to confide loudly to us all, ‘Glen and I really need to spend more time together as a couple. You know, just to be together. Just to really love each other.’

A girl walking ahead of us turned around and said loudly but calmly to Tanya, ‘Do you mind? There are single people present.’ Then she turned and strode out of the park.

Several of us could not contain our applause.