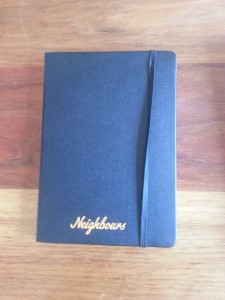 Brace yourselves. There’s a lot of information in this next sentence.

My friend Vaya, who hosts the comedy recap podcast Neighbuzz, told me I should enter a competition to win tickets to a preview screening of Fox FM presenter Fifi Box’s first episode on Neighbours at the Jam Factory on Chapel Street. I thought it was a very good idea for people involved in the Neighbuzz podcast to go along and spread the word, so I agreed.

It was simple to enter, the instructions were to answer the question ‘Why do you love Neighbours?’ I wrote 500 words on Neighbours as an imaginary community that also facilitates bonding and a shared language in social relationships. Then I realised the word limit was 25 and edited my thoughts and feelings to the point of fatuousness.

Luckily, the saying ‘You have to be in it to win it’ has never been more relevant but inadequate. It was a case of ‘If you’re in it, you’ll win it’. If someone had written ‘I love Neighbours because the pictures move’ they still would have won, and actually that is more profound than the 25 words I eventually submitted.

I got the call to say I had won and was also able to bring a friend! I found a friend, apologised profusely and she agreed to come! Also attending was everyone else associated with the podcast Neighbuzz because unbelievably we ALL won!

We arrived for the big night and waited in line. At the front of the queue Fifi Box’s radio co-hosts, Dave and Fev I think we’re supposed to call them, were posing for photos with attendees. I began to look around for things I could hide under and decided I would simply shriek if they tried their nonsense with me. They didn’t.

I arrived in the cinema untouched by human radio breakfast presenters. Excitingly, there were goody bags on our seats. These contained Neighbours merch including notebooks, mugs, key-rings and usb sticks. I was pleased but there was a choc-top shaped hole in my heart. Even though the invitation mentioned canapes and cocktails but not cinema snacks, I had hoped. On the other hand, I was wearing white, so I was philosophical and tried to move on.

Dave and Fev introduced the proceedings and spoke for a bit pretending that they hadn’t been pretending on radio that Fifi is ill-qualified to be a soapie star, and then perhaps pretending that they’ve changed their minds and it is actually a really good idea. Then they introduced the Neighbours stars who had come to the screening, including Ex-Father Doe, Aaron Down the Mines and Izzy the Best Bitch Ever. They have names in real life, but they’re not my real friends so I haven’t bothered to look them up.

Then the episode began. Everyone looked much bigger than usual, because it was on a cinema screen, which is bigger than my laptop. Fifi Box was good. She had a lot of work to do in her first episode, reuniting with her daughter XanCan, facing a barrage of criticism from Sheila and then acting super-dodgy on her mobile. You couldn’t tell that she hadn’t acted before and I think we’ll be seeing more of her on the tele.

After the episode Fifi fielded questions from the audience. Vaya asked a question and got in a plug for her podcast Neighbuzz, so I felt my work for the evening was done.

On the way out some people who I don’t know and am not associated with stole all the spare goody bags and we moved on to the cocktail (house wines and beer only actually) reception.

More Neighbours stars had turned up including XanCan and Sheila. When I’m in a room with someone famous I am so impressed that I bend over backwards so as not to seem impressed and can verge on being rude. In order not to embarrass the podcast I decided I was not the best person to schmooze the room and I stayed near the goody bags drinking sparkling white.

The canapes were quite good. Someone mentioned duck colons as I bit into a duck spring roll but I’ve moved on. I quite liked the prawns in a long twisty cone and there was nice pizza and mini vegetarian pies. I did not spill anything on my white outfit, making me wonder again if a choc-top could have been a valuable addition to the evening. Actually, I don’t wonder, I know I would have deftly eaten it leaning forwards and it would have been great.

So that’s my story of how I ended up at the Jam Factory on Chapel Street watching a preview screening of Neighbours with Fox FM’s Fifi, Dave and Fev. Next week I’m going to continue to explore different cultures of the world by visiting some Albanian nuns in a cave.

PS. I’m suddenly worried that this sounds really ungrateful. It was actually really fun and nice. Thank you for having me.