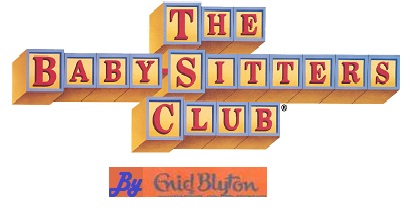 I’ve been dipping back into some Enid Blyton stories recently. It’s a little shocking because like most of us, I have been molly-coddled in recent times. Modern kids books are all like, “It’s okay to be different” and “Everybody is a good person really”.

Enid Blyton books are like, “Stop crying or I’ll hit you with my hockey stick again. No-one likes you for a very good reason, you’re different”. And, “These evil goblins are the end. Let’s steal all their stuff and run away”.

You see how much more fun reading was before people had feelings?

So because I can’t stop talking about ‘The Baby-Sitter’s Club‘ I have imagined what the BSC would be like if written by Enid Blyton.

Firstly, let’s be clear, no-one does any babysitting in Blyton’s books. Even the Famous Five’s only proper girl Ann was too busy for that. Enid Blyton characters are seeking adventure, or at the very least jolly japes. Snivelling younger children are a hindrance to crime solving, magical travel and midnight feasts and they are barely tolerated let alone sought out through advertising.

The Baby-Sitters Club is a character driven series so I below I have outlined how the BSC members would fit into a world of magical adventure, French lessons and pudding.

Kristy fits right in. Whether she’s flying around on the furniture, organising a raid on a cave of jewel smugglers, or developing close relationships in an all girls boarding school. It’s no problem.

Claudia is a jolly good sport who organises sausage sizzles at all hours of the night.

Stacey’s attention seeking fainting and clearly intentional diabetic comas earn the wrath of the other children who tick her off. Eventually Stacey learns to shut up and pretend to drink the ginger beer.

Mary Anne shuts herself in a cupboard after an own goal causes her hockey team to lose again. Her sobs alert the French teacher who gives the whole class detention. The other girls lock Mary Anne in the cupboard and she learns a lesson.

Dawn is very happy to climb trees and journey to magical lands because that is one of her main hobbies anyways. Dawn is an adventure loving traveller who can’t understand why the native fairy creatures don’t always appreciate her visits. When they are horrid she kicks them into the river and catches a magical escape route home.

Jessi…I don’t think she’s really in it to be honest. Don’t complain or you’ll be called political correctness gone mad.

This all makes sense and seems reasonable.