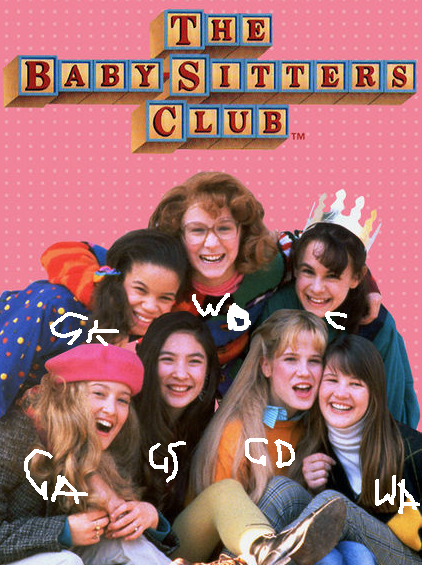 How did I only just think of this? Let’s not waste anymore time.

During a close semi-final Kristy deliberately steps into the opposition goal circle to draw a free pass and prevent a shot at goal. Her plan works but her guilt at her own un-sportspersonlike behaviour takes a whole book to work through. #676 Kristy and the Umpire Who Should Have Called Advantage.

Wing Attack. Because, you know, blah.

In #5456 Mary Anne Forgets her Netball Nicks, she and her steady boyfriend, Logan, start a mixed netball team to make their relationship stronger. Unfortunately, evil bitch Cookie is on the opposing team and dobs Mary Anne in for a uniform violation. Luckily, Logan sees through Cookie’s evil plan and they break her finger.

Goal Attack. If you need me to explain why, it’s hard to understand why you’re reading this. Stacey is sophisticated AND up-herself.

Stacey has too many oranges. #43243 The Truth About Stacey is She Has Something Stuck in her Teeth.

Claudia wants to quit netball to concentrate on eating junk food and reading erotica. In #93402 Claudia and the Sad Shooting Percentage, Kristy finally replaces Claudia with her seven-year-old sister Karen Two-two. Unfortunately, Karen is also committed to another netball team and gets an ankle injury from pivoting too much. Kristy makes Claudia rejoin the team.

Goal Defence – because she works hard and then judges.

In #3423964 Dawn Saves the Game, Dawn makes natural, chemical-free, organic deodorant for the whole team. They all pretend to wear it, and Dawn can’t smell herself, so she thinks it works.

Goal Keeper – because Jessi is tall and graceful, and, as a ballet dancer, she can balance on one leg.

In #89042 Jessi and the Big Decision, Jessi is forced to choose between netball and ballet. She chooses ballet.

Wing Defence. I’ve never been more certain of anything in my life.

In #4342 Mallory is Here If You Need, Mallory thinks her longed for chance to play Centre has arrived when Kristy is sidelined with hepatitis. But, instead, Kristy organises for Shannon to fill in. Mallory learns that she will never be important, just as she will never be older than eleven and get to baby-sit at night. She starts bringing the oranges.