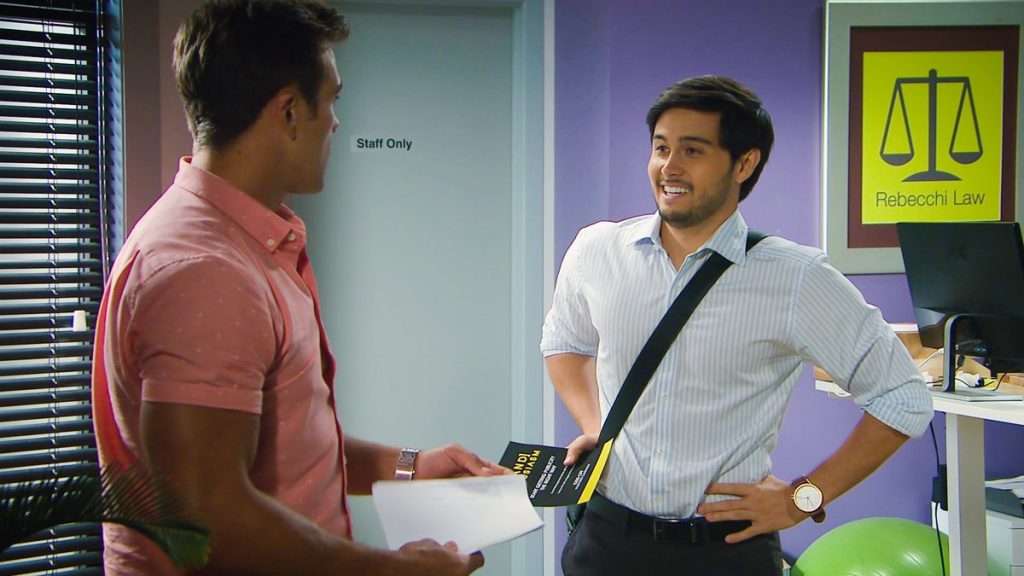 Usually I fold the washing or try to touch my toes (I can’t) while watching Neighbours but today I’ve decided to type. I’m taking this step because I’ve had e-flipping-nough of the washing and my shins (knees on a bad day).

In summary, Friday’s episode of Neighbours (epidsode 7590!) was all about advice, solicited and otherwise.

The day kicks off with the two teachers who shagged earlier in the week meeting awkwardly during their morning exercise. Finn wants to tee up a date but Ellie is like nah I have marking because I’m a teacher.

In the Kennedy home, Susan tells Toadie he’ll have to do some jobs now that his arm’s out of a plaster. I’m pretty sure people with one arm can still do housework, but anyway. Susan offers Toadie a choice of mowing the lawn or doing the laundry. This is what you do with toddlers; the choice gives them a feeling of control. Unfortunately, it’s trickier with people who can reach the door handle and Toadie gets out of housework because he receives an envelope. It is never good news when a lawyer gets an envelope and this one puts Toadie in a foul mood. There’s no time to put a load on apparently and he leaves immediately for the office. The fact that he has avoided doing the washing is never resolved and has put me in a stinking mood too.

Piper and XanCan are out the front of a caravan like they’re in Summer Bay. They’re not, they’re at a suburban backpackers. When Pippa, I mean Piper complains about the loud music a Bad Backpacker comes on too strong, claiming to know a lot about the Asia Pacific region. XanCan sticks up for her friend by pointing out that Piper is already owned by someone else. The Bad Backpacker implies Piper’s boyfriend Tyler is stupid.

Tyler is at the Rebecchi Law/Brand Enthusiasm headquarters breaking the news to his brother Aaron that he’ll be in Daylesford for the weekend. Apparently Tyler and Ben will be doing a mechanics course but I think we all know they’ll be visiting the lavender farm and drinking from the mineral springs. Tyler gives Aaron advice about love. Tyler has it all sorted out because he’s a 25-year-old living with his school-aged girlfriend in the mezzanine of a tin shed. This sounds wrong on paper but as many people have pointed out, it’s not actually illegal! Aaron says again that he wants David to to explore all there is out there, which may take some time.

Toadie turns up at the office looking grumpy in pastels, a world first. I hope Susan enjoys washing the angry, bitter sweat from that synthetic fabric later in the week because Toadie has tested her boundaries and now that he knows he can get away with it, he’ll never do washing again.

When Father Jack is not knocking up his parishioners he gives them advice like a machine. Naturally, David is keen to tell Father Jack he has come out. Jack is very accepting and likens this experience to becoming a priest. David seeks Father Jack’s advice on how to approach Aaron twice during the episode and Father Jack uses neither opportunities to tell David he’ll go to hell for being gay, maybe because Jack’s not on the clock. In the cafe, the new Rebecchi overhears that David is unlucky in love and advises him to try flattery. I like this idea. David could say something like, “Aaron, you’re really good at Tweeting” or “You haven’t punched anyone in the head and left them for dead in a car park for like a year now!”

Ellie and Susan Kennedy are having a Nescafe and chat. Ellie is seeking Susan’s “good instincts” but Susan is reluctant to give her niece advice. In the end Ellie persuades Susan that one little nugget of wisdom can’t possibly hurt, and Susan advises Ellie to put the brakes on her relationship with Finn. XanCan is eavesdropping through the fly screen door and hears the whole thing!

Back at the backpackers a game of dodgeball is afoot but it’s a violent, foreign form of the game. Tyler and the Bad Backpacker have words while the other backpackers watch and snigger. Neighbours is doing nothing for the reputation of backpackers and I suspect we will have to do a special episode of Neighbuzz on media representations of travellers with bags rather than wheeley-suitcases.

XanCan tells Finn, her teacher, what she has overheard through the flyscreen door. He asks her for a XanCan Special and we are left to assume they will one day root.

Toadie is still very angry in his pastel shirt. He is so angry that he gives Aaron some home truths, suggesting that Aaron’s business Brand Enthusiasm is a flop. Toadie is being very negative, and I suggest that rather than carping at Aaron he should put that energy into scrubbing Susan’s smalls.

Back at the backpackers the aggression is through the roof and the music is still very loud. Tyler snatches a phone and kicks the Bad Backpacker out. This is a wonderful opportunity for the Bad Backpacker to go somewhere good, but will he take it?

David pops into the Rebecchi Law/Brand Enthusiasm headquarters and tries to give Aaron a compliment. Instead of taking my advice and praising Aaron for not committing GBH recently, David chooses to focus on Aaron’s physical appearance. David then asks Aaron out to dinner. Aaron is cross. David is being too pushy and needs to back off and stop popping into Aaron’s work to sexually harass him.

Back at the backpackers Ben tells Tyler he needs to apologise to Piper before they leave for Daylesford to have a high tea and check out the antique shops…I mean, do their engine-fixing course. Tyler approaches Piper but merely manages to perpetuate the fight rather than resolve it. Piper says she doesn’t need to be protected and tells Tyler to go. On his departure the Bad Backpacker appears immediately and is inappropriate again. It would appear that Piper does need Tyler to protect her, which had better not be true.

So that’s it. Here’s how I score the advice givers in this episode.

Susan: She showed the kind of faux-reluctance to give an opinion that lends advice more weight – and she also happened to be right. 9/10

Tyler: He has fundamentally failed to realise that he and Piper are not an inspiring example of how to do love. 2/10

Father Jack: He pretended he doesn’t know how to pick up, a clear lie, but at least he didn’t tell David that he loves the sinner but not the sin or something awful like that. 7/10

The New Rebecchi: He tells David to flatter Aaron. I’ll give him the benefit of the doubt and assume that the New Rebecchi didn’t know Aaron has already asked David to stoppit. Better advice for David would be, “Stoppit”. 5/10

Toadie: We all know Brand Enthusiasm is really just Aaron’s Twitter account and a couple of sausages, but shhh Toadie, you are the owner of Rebecchi Law and 1,000 polyester shirts. Get back to the laundry. 4/10